Teams win when they’re motivated, engaged, flexible and resilient, and when they put the team first, right? Wrong. 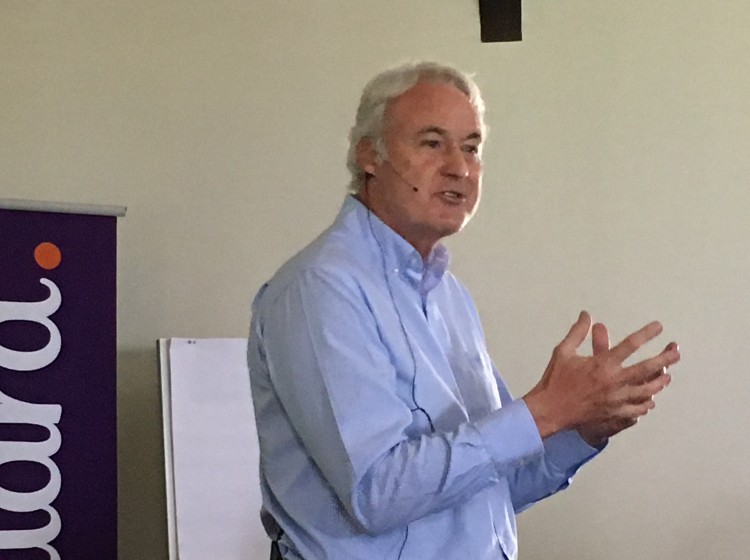 Alain Goudsmet emphasises a point during his presentation


Such teams perform, certainly – but teams have a winning culture when they’re inspired, committed and agile, and they bounce back higher from setbacks and put the company first.

So says leading sports mental fitness and executive coach Alain Goudsmet, who presented a seminar at Hollard’s Villa Arcadia campus this week on energy – how to harness energy in its various forms to produce winning results.

In attendance to hear Goudsmet speak were Hollardites and members of the Nedbank and RMB executive teams, who had joined forces to bring him and his message to a South African audience.

In introducing Goudsmet, Hollard Broker Markets joint MD Pierre Geyer – who with his counterparts from the other companies had benefited from Goudsmet’s wisdom at the INSEAD executive business school in France last year – said: “We said to ourselves, we can never not share this with our teams. Let’s get this, let’s share the cost, and let’s share this with our teams.”

Goudsmet, who is currently visiting the country with the Belgian hockey team (he is also that country’s Olympic team’s mental fitness coach), was then engaged to present his seminar.

“It’s all about energy management,” said Goudsmet at the beginning of his presentation, explaining that the role of the leader is to provide energy. “As leaders, if you don’t create that energy, who will?”

Using an Adidas staff engagement survey, in which the company scored 80% and higher on most measures, with 44% of staff admitting that they were thinking of leaving, he said this would not work for an Olympic hockey team.

If that were the case, he argued, nine of the 11 players would be engaged on the field; nine would know which goal was theirs; eight would know the position they played; two would not be inspired to perform at their best – and while 10 would recommend the team, five would be thinking of leaving it.

And he should know about motivating an entire team: at the past three Olympics, the Belgian hockey team has progress from having a participation culture in Beijing in 2008, to achieving a performance culture and fifth place in the 2012 Games in London, to attaining a winning culture and the silver medal in Rio last year.

The difference between the performance and winning cultures, he said, is “positive dissatisfaction”; in other words, the desire to always become – and do – better, to not “just want to win, but to be in the history books”. For Tennis player Roger Federer, for example, anything but a win is a failure.

“Being dissatisfied is a sign that you want to get better,” said Goudsmet.

Key to the approach to bettering performance is two elements: keeping it simple, and making it visible. “What you make visible will inspire the brain,” he said.

By way of illustration, Goudsmet spoke of “three walls”: the wall of the past, which lists timelines and achievements, to promote pride and belonging); the wall of the present, which lays out current objectives; and the wall of the future, which signals longer-term intent. The three walls are very much a sporting phenomenon, but are also used effectively by corporates.

Goudsmet also explained the three levels of energy: intellectual (IQ), emotional (EQ) and physical (PHQ). Like a tripod, the three provide a stable platform, and resting on them is a fourth: the spiritual quotient (SQ).

“This (SQ) is the human backbone. We need that spirit to stimulate and engage,” he argued, saying that it consisted of four “bones”: who I am, my values, what my drivers are, and what I want to achieve – my quest.

Drawing a wave diagram, where the positive amplitude represented energy recharging and the negative amplitude energy expenditure, Goudsmet said that balance is critical: the expending of energy is necessary for success, but it needs to be equally replenished.

He listed seven sources of energy in that regard: sleep, nutrition, physical activity, mental satisfaction, relaxation, social contact and laughter.

“In some organisations there is too much focus on the [expenditure of energy] … Usually we don’t activate [recharging],” he said, calling the balancing of amplitude “the law of vital oscillation”.

Getting people to move forward inevitably involves pain of some sort, but “if you treat pain as a limit, you will forever remain in your comfort zone”. However, “when we enter the pain zone, we give our players some pain relief”.

This entails addressing the four energy levels – IQ, EQ, PHQ and SQ – by respectively providing focus, fairness in praise and critique, physical support and a sense of why.

“We need to constantly be in balance,” said Goudsmet, who underlined his earlier statement: “It’s all about energy management.”