Daredevil Run 2017: it’s Speedo time – and for men to care for themselves


Men: if your car developed a rattle, you’d take it to a mechanic right away, right? So why would you not do the same with your own body? 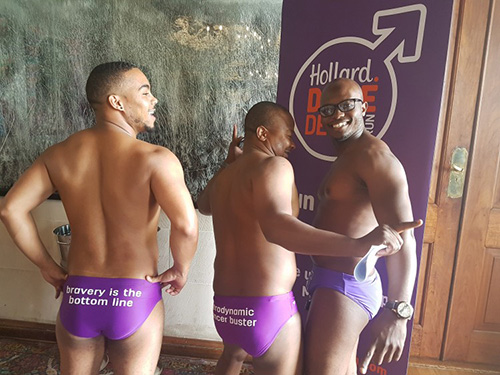 A group of Daredevils make their point


This was the analogy used today by Torsten Koehler, testicular cancer survivor and CEO and founder of Love Your Nuts, a foundation that raises awareness of this male cancer, at the official launch of the 2017 Daredevil Run.

Hollard is the sponsor of the Daredevil Run, a madcap adventure in which men clad only in purple Speedos run through the streets of Johannesburg, Cape Town, Durban and Mbombela to raise awareness of, and funds to fight, testicular and prostate cancer.

This year’s Daredevil Run, the eighth in nine years, takes place in these four centres at 3 pm on 24 March. Go to the Daredevil Run website for more information. 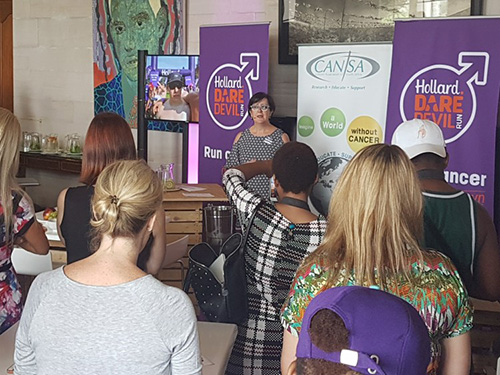 In welcoming Daredevil Run ambassadors, CANSA, runners, Hollardites and the media to the launch event at Hollard’s Villa Arcadia this morning, Hollard chief marketing officer Heidi Brauer spoke of Hollard’s delight at creating awareness about male cancers by way of “this crazy, crazy thing”, saying that it helped people to take charge of their lives.

She touched on the idea that men don’t care for their own health, saying: “We haven’t, as a society, really embraced the idea of men taking care of themselves.”

She pointed out that at last year’s Daredevil Run, 100 men who had taken the prostate-specific antigen (PSA) test – a finger-prick test that is offered free of charge by CANSA – had been identified as being at risk of having prostate cancer.

“That’s 100 men, how many families, who were impacted positively,” she said. 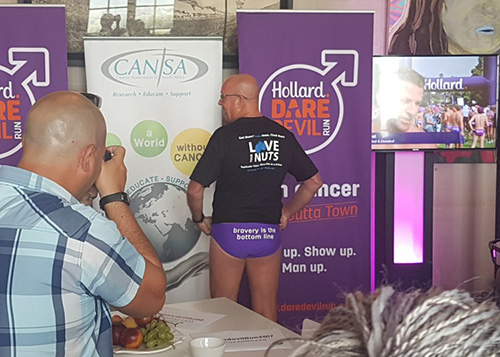 CANSA CEO Elize Joubert also hammered home the point that men are loath to manage their own health, saying: “Traditionally, men are very reluctant to discuss health matters … That’s why we are so grateful to Hollard [for the Daredevil Run]. Early detection is key to effective treatment.”

Joubert thanked Hollard for “caring enough about men”, and for Daredevil Run participants, “who are so brave to wear that purple Speedo”.

Koehler, who has dedicated his life to spreading the word about testicular cancer since his early diagnosis and successful treatment 21 years ago, said he employs humour to get his point across – and get men to talk about it.

“By talking balls, I’m saving lives,” he said. “Because it’s in a funny way, it works for men.” 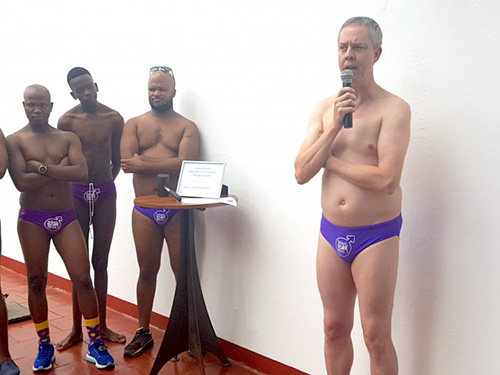 'It’s not about the shape of your body, it’s for all shapes,' says Hollard's Warwick Bloom

He said he often likens a man’s body to a car, to make the point that men look after their vehicles better than their own bodies – yet they expect their bodies to work indefinitely.

Attendees were then invited to participate in a series of fun games highlighting key messages – such as ten pin-balling, bashing a testicle piñata, pinning the Speedo on the Daredevil, among others – interspersed with talks from other speakers.

Koehler explained that, while preparing to teach sex education to a class of schoolchildren he had self-examined his testicles and discovered “a small lump on my nut”, pointed out that testicular cancer is most common in men between the ages of 15 and 38. 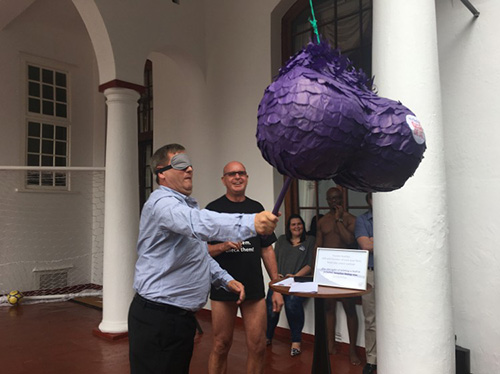 Losing a ball hurts: a volunteer beats the testicle piñata

David Lucas, a prostate cancer survivor who was saved by an early PSA test, said: “Don’t be a big prick – have a small one.”

Petrus Loubser, managing director of Androcryos, a cryogenic storage company, said: “We often see young men coming in to store their sperm before going for chemotherapy, and when I say young, I mean 17.”

He said that cancer patients are “at a disadvantage without hope”, and storing their semen was an indication that his clients hoped to be cured.

Hollard marketing general manager Warwick Bloom, a keen Daredevil, challenged men to participate in the Daredevil Run, saying: “The Daredevil Run is not a race; it’s a showing of solidarity.” 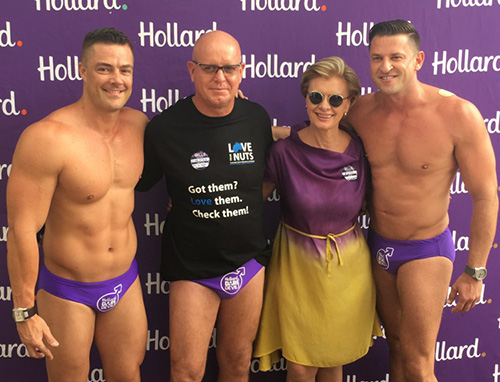 Pointing to his Speedo-clad colleagues present, he added: “It’s not about the shape of your body, it’s for all shapes.”

This was underlined by Koehler, who concluded proceedings by saying: “Shape, size, colour doesn’t matter, because cancer’s not picky.”