A tale of two Roberts – and a partnership for growth

Sprinklers in a centre-point-irrigation system watering the crops beneath them. 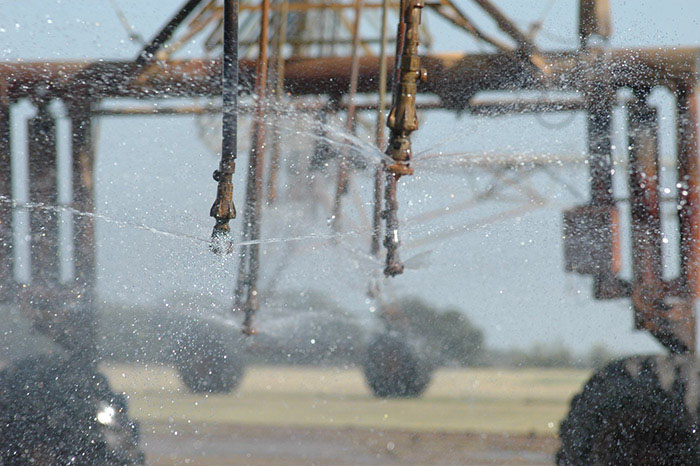 In the South African insurance landscape, The Hollard Insurance Company stands out in a few respects, not least because it started out as a family business. It had its origins in 1980 when Robert Enthoven and his son Patrick purchased the motor book of failed insurance giant IGI.

It is also a multinational company, with more than 4 000 employees in 18 territories around the world. And it is still majority-owned by the Enthoven family.

In the agriculture space, Valmont Industries, Inc. is a leading international player when it comes to irrigation systems – in particular, centre pivot irrigation. And like Hollard, it began as an upstart family business.

It all began in 1946, when American Robert Daugherty invested $5 000 – his life savings – in Valley Manufacturing, a small company based in Valley, Nebraska, and began fabricating farm elevators (the machinery that moves grain into and out of silos).

The very next year the first centre pivot irrigation system was invented, by a man named Frank Zybach. He had little success with it at first and in 1954 licensed his patent to Valley, which spent a decade improving his invention. And the world of commercial agriculture was about to change forever.

This form of irrigating crops holds several benefits. It uses less labour than most surface irrigation methods because furrows and channels don’t have to be dug. Soil also doesn’t have to be tilled as much, reducing water run-off, soil erosion and soil compaction. And water usage can be closely managed, especially with today’s high-technology equipment.

Centre pivot irrigation revolutionised post-World War II agriculture, particularly in the US. That country’s semi-arid High Plains, characterised by droughts and crop failures, and resulting in the Dust Bowl of the 1930s (immortalised in Great Depression-era novels such as John Steinbeck’s The Grapes of Wrath), was transformed into one of the most productive agricultural regions in the world.

Pivotal (no pun intended) to it all was Valley Manufacturing, which became Valmont Industries in the 1960s. It continued innovating with both centre pivot and linear move irrigation systems over the decades, and today is one of the largest irrigation equipment companies in the world.

And Robert Daugherty was the company chairman and CEO until 1993, just shy of 50 years after he had sunk his life savings into Valley Manufacturing.

Like Hollard, which remains headquartered in Johannesburg and is resolutely proud of its African roots – it refers to its international expansion as “Afro-globalisation” – Valmont Industries still operates out of Douglas County, Nebraska, where the city of Valley is located.

Neither company would have existed, had it not been for their respective Roberts – Enthoven and Daugherty – and their drive and determination to build something great from the ground up.

Today, both partner with farmers in growth, both the nutritious and economic kinds. And while we may not always realise the roles that they play in our daily lives, we’re all better off for them. – Andries Wiese, head of Agri, Hollard Insure